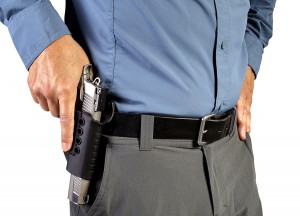 Soon Texas citizens with proper licensing will be able to carry their handguns openly in public. Effective January 1, 2016, House Bill 910 authorizes individuals with a license to openly carry a handgun in the same places that allow the licensed carrying of a concealed handgun, provided that any openly displayed gun is in a shoulder or belt holster. All holders of a valid concealed handgun license can now carry handguns openly as well without having to obtain a separate license.

Perhaps some business or property owners don’t want handguns on their premises. What can be done to prevent this? Can you lawfully forbid the open (or concealed) carrying of handguns on your property or business? Will you be infringing on the new Texas law, or worse, an individual’s Second Amendment Right to Bear Arms?

The good news is you have options.

As an employer or property owner, you can outright prohibit both the open and concealed carrying of handguns inside your building. The bad news is that employers and property owners cannot ban employees who hold a valid handgun license from keeping a concealed handgun in their car on the premises (but this doesn’t apply to non-license holding employees).

So, what should you do? A public or private business may prohibit the carrying of guns inside their business by posting signage. However, the Texas Penal Code provides very strict language and formatting requirements that must be complied with, or else the sign is unenforceable (we can help with this). In fact, you need to post two signs, one for concealed carry and one for open carry, in both English and Spanish, and strictly in accordance with the language in the Texas Penal Code. As a property owner, perhaps it’s time to revise your building rules and regulations (which we can do for you) if you want to prohibit handguns, concealed or open carry.

….But, while revising building rules and regulations is easy enough, what happens if a major tenant is adamant about wanting handguns permitted on the premises?

Even more interesting, did you know that no license is required to open carry a long gun (rifle or shotgun, or even an assault rifle), except in certain statutorily prohibited premises? Have you covered this in your building rules and regulations? We can assist you with this as well.

What have you instructed your security personnel to do if three people walked into the building openly carrying a SIG Sauer 9mm or an assault rifle, either appearing to be hot?