What is a mandatory arbitration clause? 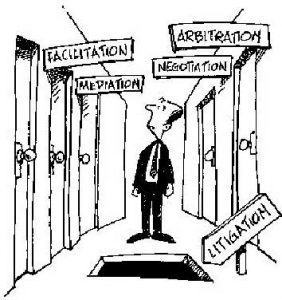 When drafting your contracts, you may have the opportunity to insert a mandatory arbitration clause, preselecting arbitration in the event of a dispute or litigation. Such a clause could create a requirement that if the opposing party were to have a dispute with you under or about the contract, they must send it to arbitration instead of filing a lawsuit in a court.

Whether this is the right choice is difficult to determine, but here are the advantages of arbitration and court to consider before deciding whether to insert a mandatory arbitration clause.

When a complaint is filed, the parties have no control over which judge will be assigned to the lawsuit. A judge will randomly be assigned, with only a brief consideration of whether the assigned judge has any experience with the category type of the lawsuit and regardless of whether the judge has knowledge of the subject matter of the lawsuit (in federal lawsuits, a very brief check for conflicts of interest is also done). Some judges favor plaints, while some favor defendants. Judges typically also have political bias, and some are hesitant to rule on final decisions, instead prolonging the lawsuit and relying on jury decisions.

In arbitration, the parties have freedom to mutually agree on an arbitrator. This allows for parties to select an arbitrator that will have extensive experience on the subject matter of the dispute. However, because the parties are opposed, it is not guaranteed that you will be able to select the exact arbitrator and instead will have to compromise with your choice.

Arbitration can be completed and finalized in less than two months. The contract can even include a provision for a timeline on completing the arbitration. For a busy civil judge, it can take months for a single preliminary hearing and often over a year for the final trial. This is further delayed when one of the parties seeks more time (which is practically guaranteed to be granted if some explanation can be offered).

In addition, courts are largely controlled by statutory and procedural rules, compared to arbitration where the parties can agree to do practically anything.

Arbitration is a private process. Arguments will not be filed in public record, and the proceeding will not be open to the public. In a lawsuit, documents and pleadings are typically available to the public, and anyone can come and watch hearing or the final trial.

If you have questions about about what to include – or not include – in your next contract, contact Holmes Firm PC at 469.916.7700.